Since the beginning of the Space Age, the relationship between space exploration and development and nuclear power as a source of propulsion, heating, and electricity was seen as symbiotic. Before Sputnik was launched in 1957, the development of nuclear thermal propulsion (NTP), in NERVA/Rover programs, had already been going on for two years. These programs continued until their cancellations in 1972. During the nearly two decades of development, a solid foundation of knowledge was acquired about nuclear thermal rocket (NTR) technology. The program was cancelled, based on political, not technological, reasons.

Since the beginning of the United States space program, radioisotope thermoelectric generators (RTG) have been used as sources of heat and power on missions ranging from Apollo to New Horizons. The farthest human object in space, Voyager 2, is powered by a RTG. The “Nuclear Power Assessment Study” released by John Hopkins Applied Physics Laboratory in 2015 states that the newer radioisotope power systems will continue to power Humanity’s robotic exploration of the Solar System.

Nuclear systems allow for more energy than than either chemical or solar sources. Due to this increase in available power, many of the restrictions limiting the exploration and settlement of space can be overcome. The main advantages of space nuclear applications are smaller volume, reasonable mass, long lasting operational times, independence from the Sun’s energy, the ability to deploy kilowatt and megawatt power sources, and reliable operations.

Space is a harsh environment. For power needs closer to the Sun, solar power can provide much of the power needed for most current space applications. As we journey out farther from the Earth, the efficiency of solar power declines. For most exploration in space out past the Earth, nuclear power sources become necessary. They provide the necessary heat and electricity for instruments to function properly. For future missions, both human and robotic, to Mars and the outer planets, nuclear energy will be necessary to power and heat the science packages that will further human knowledge of our neighborhood in space.

For serious human exploration and eventual economic development of space, both nuclear fission systems and nuclear propulsion will need to be developed. Nuclear fission plants will provide the necessary electricity and heat to settle the Moon and Mars. Solar energy will compliment both, but it is well documented that small nuclear reactors would give an advantage to settlers that solar would not.

Nuclear energy sources would also be necessary for any large-scale, local resource development. The power needs of any space mining operation could be met much easier with nuclear energy. Any such operations would rely almost entirely on nuclear energy to develop resources, due to the necessary heat requirements. In situ resource utilization (ISRU), the collection and processing of materials in space for human uses, could be done with nuclear power on a large-scale.

Nuclear propulsion methods, both nuclear thermal and nuclear electric, would allow for more efficient use of propellant. Nuclear thermal rockets, which have been studied at length by both the United States and Soviet Union/Russia, involve heating a fluid, typically hydrogen, in a nuclear reactor and expanding it out of a rocket nozzle to produce thrust. This leads to higher specific impulse, almost double that of chemical propulsion. Specific impulse (usually abbreviated Isp) is a measure of the efficiency of rocket. This allows for reduced travel times. This would allow any future explorers on Mars to stay longer on the surface. Many Mars mission designs have used nuclear thermal rockets as their preferred choice of propulsion. This was one of the main goals of the NERVA/Rover programs, and also one of the reasons it was cancelled. Solid core nuclear thermal rockets have been well-researched and ground tested. Liquid core and gaseous core engines theoretically would lead to even higher specific impulses, therefore opening up the outer Solar System to human exploration and eventually settlement.

Where do we stand today? Since the cancellation of NERVA/Rover, there have been a few starts and stops to serious nuclear propulsion and fission power systems. Project Timberwind was part of the Strategic Defense Initiative developing NTR for defense purposes, but was cancelled before ground testing began. However, there were still some advances in materials technology made. Project Prometheus began in 2003 with the purpose of developing smaller fission reactors for space applications. This was to be a team effort between NASA and the U.S. Navy. Rather than developing nuclear thermal propulsion, the fission reactors developed in Project Prometheus were to be used in nuclear electric propulsion (NEP), using a reactor to run ion engines. This was to culminate in the Jupiter Icy Moons Orbiter (JIMO), both of which were cancelled in 2005. Recently, NASA’s Marshall Spaceflight Center have been testing out nuclear fuels for nuclear thermal propulsion for a human Mars mission.

For any significant human exploration and settlement of the Solar System to take place, fission power systems, and nuclear thermal and nuclear electric propulsion systems need to be researched, ground tested, space tested, and deployed into operation. These technologies need to be treated as a long-term,  space-infrastructure project. 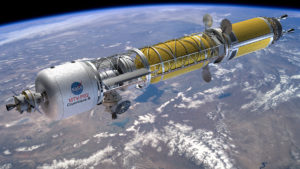 NERVA/Rover engines were being developed not only for a possible Mars mission, but also for a Lunar shuttle. Some engines were designed to be turned on and off up to sixty times, allowing for such a shuttle. A similar set of goals needs to be established and studied. Developing NTP designs with only the goal of getting us to Mars is shortsighted. A more expansive set of goals guiding the development needs to be established. A cislunar nuclear shuttle would allow for the development of Moon settlements. Supplying any permanent Mars or Moon settlement would require large amounts of supplies to be sent until advanced ISRU was well established, and NTP could do this. With liquid and gaseous core engines, it is possible to shorten travel times between Earth and Mars, and a functioning interplanetary economy could eventually develop. These cores would also open up the resources in the asteroid belt and exploration and possible settlement of the outer planet’s moon systems. Without NTP, none of this is practical.

Fission power systems would allow settlements on Mars and the Moon to have more energy than solar alone could provide. This would lead to better resource development and utilization, and therefore the foundation of a self-sustaining space economy. Economies and settlements can only grow as much as their energy resources allow, and fission power would allow for scalable energy systems that could provide the necessary excess energy for economic expansion. Just enough energy is not enough, there must be excess for there to be any sort of successful economic development. Mining and processing asteroids would require large amounts of energy, particularly heat energy, which is much easier to deploy using nuclear power systems.

There is already a large knowledge-base for some of these technologies, however, it is spread mostly between various Department of Energy and NASA programs. Research projects in these fields have unfortunately been subject to cancellation time and time again, subject to the whims of politics. This has led to significant strides in technology development, only to be shut down on the verge of taking the next step. Without this technology, any sort of permanent human presence in space is not possible. Until we take the development of nuclear space applications seriously, we will remain in low Earth orbit, and the only significant economic use of space will be satellites. Due to legal regulations, private companies such as SpaceX and ULA developing nuclear based propulsion solutions is not practical at this time, therefore the onus is on government agencies. A framework similar to the ISS, ITER or CERN that spreads the cost among several different developed nations would make it cost-effective. This would also allow for the continuation of the project if a backing country’s political climate changes and no longer sees this as a worthwhile endeavor.

The future of Humanity’s presence in space depends on the long term development of nuclear space systems for settlement and exploration. It is an undertaking that will not reap immediate rewards, but needs to be treated as a long-term research and development project, similar to the quest for nuclear fusion, because the long-term benefits to humanity are immense. It is the destiny of humanity to explore and settle the Solar System, and this is only possible through nuclear technology.